After many years I am packing up my writing room. It’s where I put on music and sit with a coffee. Look out the window and watch the leaves change from green to orange, snowflakes float, buds open and snow melt. It’s where I watch the grass grow, the lilac tree bloom, and spring arrive. Where my animals spend most of their day. They sleep while I write. It’s where my mind roams. Where I turn words into paragraphs and creativity rules. Where I wrote three novels and rewrote…and rewrote…

Books from the bookshelves are packed in boxes and labelled. Framed photos wrapped in bubble wrap sit on top of boxes. File cabinet cleaned of notes, short stories and forgotten manuscripts now typed and saved on an external drive. The bulletin board is clear of reminders and magnets with cute sayings. The shelf above my desk sits empty except for two Buddhas and a plant. I am moving on. To a new town. A new house. A new writing room where I’ll put on music, sit with a coffee, watch the seasons change and write…

I’m about to pay when a woman pokes in front of me, hands the server change and orders a coffee. The server who I called Shirley for years but whose name, I found out today is Marion, says, “You have to go to the back of the line.” The woman is in a hurry. She has to catch the bus. Marion tells her she doesn’t care. The woman leaves. “I know I’m being a bitch today but too bad,” Marion says.

“It’s okay, sometimes dealing with people can be difficult,” I say.

The perky woman behind me pipes in, “I worked in customer service for years and I loved it.”

I want to ask her if telling everyone in line about her people loving skills makes her superior and does she realize she’s made Marion feel worse. But I don’t. Instead, I pick up my coffee and take to the back.

“Hi Sammy,” I say to the man sitting in my seat, then regret it.  A few years ago he bought the café where I spent every morning writing Sunshine Girls. He’d turned it into an old boys’ business club. They would spread their newspapers and work on two tables. Wouldn’t move it when I asked. Sammy told me they had the right. Turned out they were his friends. That’s how I ended up in Coffee Shop. Now here he is, years later in my seat arrogant as I remember. And I hate that I said hello.

“Sold the café,” he says when I sit down at the table two over from his. “It’s now a juice bar.”

I don’t care. I’m interested in what’s happening across the room. The man I call, Mafia Boss, is chatting up two elderly ladies. And I think: How come we can no longer be vocal about having a bad day? What’s with only positivity allowed and no negativity? Don’t they slide together? And how mafia can you be in a bright yellow jersey making two grey-haired ladies giggle like schoolgirls?  Who knows? All I know Marion is having a bad day. And I’m in Coffee Shop drinking from a red cup. 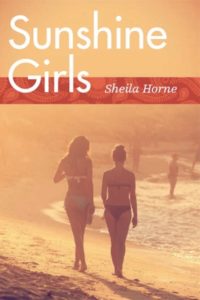 An excerpt from Sunshine Girls.

“The fight for rights, it has been going on long before the sixties,” Gilles said. “It’s only since Pierre Trudeau made his famous speech that the state has no place in the bedrooms of the nation that—”

I stared at him.

“Ella, don’t tell me you don’t know about the speech.”

Of course I knew about the speech—everyone did. I’d heard it when I was in high school and I knew the government had passed a law decriminalizing homosexuality. They’d also passed a law legalizing therapeutic abortions. In history class my teacher had said the changes were a big step for women. I’d doodled and half listened to her talk about Kathrine Switzer, the first woman to run a marathon with men, even though the head of the marathon committee tried to ban her and doctors warned if she ran her uterus might fall out. I didn’t think any of it affected me so I hadn’t paid much attention. After class we’d laughed about it and some of the girls called our teacher a “butch broad.”

At the elevator in our building, Gilles switched back to his “normal” self. “Read the papers, ma belle. Keep up-to-date with what is going on. I know you don’t think so but it affects you and your friends as women,” he said. “And today’s man likes a woman who is aware of what is happening in the world.”

He seemed to be referring to Doris. She was smart and well informed. But Mary on The Mary Tyler Moore Show, who worked in a man’s world and whose job depended on being on top of world affairs, even she dressed in a feminine manner, wanted to find true love and get married. Now I was more confused. From everything I’d read, men didn’t want smart women. They wanted women who made them look and feel good. Maybe that was Mary and Doris’s problem—they didn’t follow the rules.